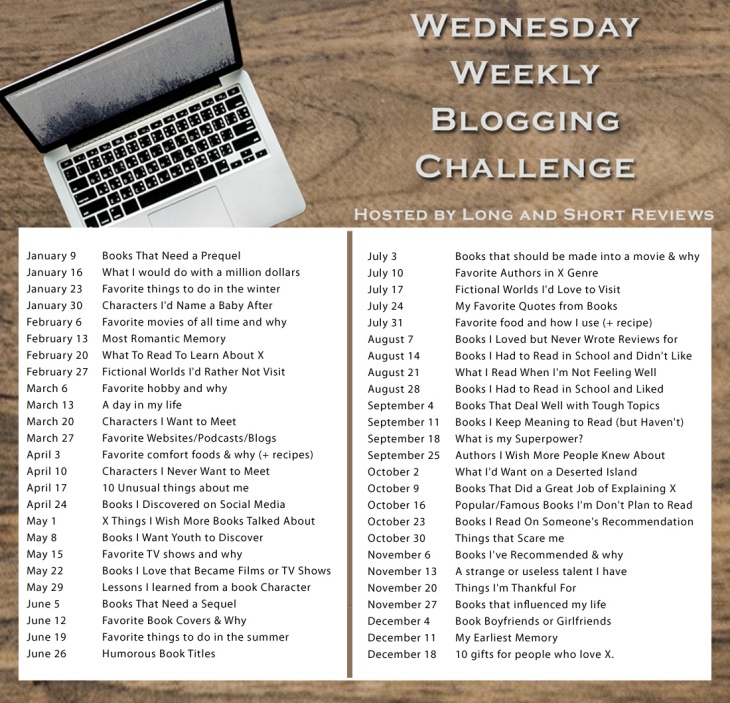 Each Wednesday from January 9 – December 18, 2019, Long and Short Reviews is hosting a weekly blog hop.

Blogging is a fun way to meet people and get to know them. We’re offering a weekly “prompt” for authors, non-authors, bookish folks and others to share something weekly and gain new friends and visitors to the blog. There’s no pressure to write something every week (though it should be fun and a challenge), but we do ask that if you do post something, you share your link on the weekly post we’ll put up at our site (it will be the top post on the home page each Wednesday morning) — the link list will be open for new links for 48 hours. Other bloggers will also share their links and you can hop over and see what they have to share.

Ha! This is a funny question because when I was pregnant with my son (and didn’t yet know he was a boy) if he was a girl, I wanted to name him Mina Gabrielle. Mina, of course, from Bram Stoker’s Dracula (though her full name was Wilhelmina and I didn’t want that), and Gabrielle after Lestat’s mother in Anne Rice’s Vampire Chronicles. I was a tad bit obsessed with vampire novels, can you tell? I think I would still name a girl Gabrielle because it’s such a pretty name.

I ended up naming him Cain Evan, and though Cain is the first vampire in some vampire mythologies, it didn’t come from that. It didn’t really come from the Bible either, though I happened to be reading Beowulf at the time and Grendel was described as being Cain’s descendant. That’s where I got the name from and in that story it WAS referring to the Biblical Cain so…it’s Biblical by the way of fiction? And, you’re going to laugh very hard (and I’m going to show my age), but the name Evan came from a character in Miami Vice. *hides face*

I also toyed with naming him Vaughn Vladimir. Vaughn just because I liked the name and Vladimir of course after Dracula, but that was vetoed. I think if I ever had another son (which is doubtful at this stage of my life) I would name him Gabriel-if I didn’t have a girl and name her Gabrielle–simply because I like that name a lot. I also think at that point people would just think I’m naming all my kids from the Bible so maybe not. I wrote a fourth Siren Song novel (which has never been released) and named June’s daughter Antigone–Tiggy for short–and I think that would be a cool name too.

So yes, I would totally name babies after characters…and have!