Today I’m hosting Sarah Zama and her paranormal historical romance Give In To The Feeling. Sarah is a regular visitor to my blog and we met through the Blogging from A to Z April Challenge, so I’m super excited to have her here today! Take it away, Sarah! 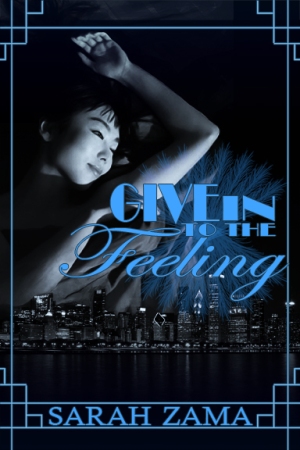 Two years ago, Susie arrived in America, leaving behind her little village in South China where spirits mingle in the mists of the rice fields and play at being human; where the expectations of a daughter are unimportant and ignored.

After her prospective husband dies, she is taken on by his younger associate, Simon, who gives her the carefree life of the New American Woman; the freedom to dress daringly and do things once only reserved for men–drinking, smoking and dancing with strangers. It’s an exciting life and she considers the loyalty Simon demands of her a small price to pay.

Until she meets Blood.

Blood offers Susie even more. He lets her speak her mind and listen to her heart. He gives her his loyalty and asks nothing in return. Through his eyes, Susie sees the golden cage she’s trapped in.

But Simon will never let her forget what she owes him. Even as Susie tries to deny her attraction to Blood, she understands it takes a lot more than daring looks and an attitude to be a New Woman. And while fighting off the bondage her loyalty to Simon built, she realizes that even here in Chicago, spirits can still trick you into believing they’re men.

Susie left Simon’s table and crossed the speakeasy toward the bandstand.

The club was dusky, smoky, chock full with people. She knew most of these people, at least by sight. The smoke and the soft light had become so familiar to her that they now wrapped around her like a warm protection.

She squeezed in between two men standing beside a table with cocktails in hand. One of them winked at her. She smiled back but didn’t stop. The show would start momentarily. Susie found a chair waiting for her by the bandstand and sat, watching the crowd ease off the dance floor as the band finished their number. As always, before the show, her heart beat faster. She liked that sensation. The music embracing her, taking control of her body — it lit a flame inside her every single time.

She watched her fellow dancers take their positions on a line of chairs on the other side of the dance floor, all dressed in yellow and showing off their legs and shoulders. All sporting black bobs adorned with white feathers.

Susie dropped her gaze to her hands as she fanned her fingers. Even her nails were polished red. Red like her lips and her dress. It took her a while, but she had become accustomed to her new look. She actually liked it, now. Her fingers were steady, didn’t tremble like the first time she danced right here in this club. Was it only two years ago?

She looked across the floor for Simon. He sat in the dusk of the far corner, his face lit by the golden glow of the stained-glass lamp on the table, a finger tapping his cocktail glass at the rhythm of the fading music.

He smiled at her when their gazes met. A small smile curled the corners of Susie’s mouth.

She raised her chin and straightened her back. The song died out and the murmur of customers took over.

A brush on her shoulder, and she thought a feather might have fallen from her headband. Its gentle touch breathed down her back, causing her a shiver that wasn’t unpleasant, but when she turned, she saw no stray feathers. Her gaze then raised to the entrance by its own accord.

That’s when she saw him.

Only people familiar to the doorman would enter, or people introduced by a customer, and she had never seen this man before. Lithe and willowy and dressed in a grey suit with a matching fedora, a grey coat draped on his shoulders. A black man with black curly hair reaching past his shoulders — and she was staring at him.

She tore her gaze away and saw his companion, taller, bigger and watchful. He wore a black suit, black fedora, black long coat and when he stopped beside his friend and leaned to speak to him, Susie saw he wore his dark hair in a long braid on his back.

Back in China, all men wore their hair in braids even longer than that, but she had never seen it here in Chicago. Simon didn’t wear it like that.
And this man was not Chinese.

Her gaze moved back to the black stranger in the grey suit. She couldn’t look away. Was he really a stranger? Hadn’t she seen him before?

The music burst alive. Susie started and jumped up, joining the dance a second later. 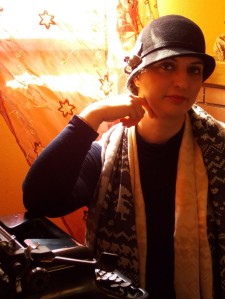 Sarah Zama was born in Isola della scala (Verona – Italy) where she still lives. She started writing at nine – blame it over her teacher’s effort to turn her students into readers – and in the 1990s she contributed steadily to magazines and independent publishers on both sides of the Atlantic.

After a pause, in early 2010s she went back to writing with a new mindset. The internet allowed her to get in touch with fellow authors around the globe, hone her writing techniques in online workshops and finally find her home in the dieselpunk community.

Since 2010 she’s been working at a trilogy set in Chicago in 1926, historically as accurate as possible but also (as all her stories are) definitely fantasy. She’s currently seeking representation for the first book in the Ghost Trilogy, Ghostly Smell Around.

She’s worked for QuiEdit, publisher and bookseller in Verona, for 14 years.

She also maintains a blog, The Old Shelter, where she regularly blogs about the Roaring Twenties and anything dieselpunk.

Thanks for being here, Sarah!