Many years ago, I wrote under a different pseudonym, in a somewhat different genre, and had a modicum of success. The name was Lydia Nyx, if you’re curious, but it doesn’t matter because everything I had published back then is no longer in print/distribution and some of the publishers are defunct. I ended up eventually shifting genres and reinventing myself as Megan Morgan. 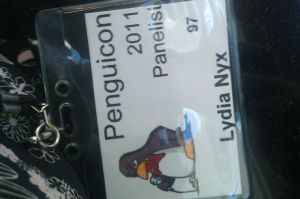 However, despite the fact I didn’t write fantasy/sci-fi, I somehow ended up being a panelist at 2011 Penguicon in Detroit (which is a sci-fi/fantasy con). It’s a funny story, and what I learned from the experience–that we, as writers, no matter where we are on our path or what we write, are all in this together–was invaluable.

I ended up at the convention because I made a comment on a blog post of a fellow author who was published in an erotic horror anthology with me. He mentioned Penguicon and that they still needed panelists (I believe he worked for the organizers? I can’t remember clearly.) and I looked into it, despite the fact I didn’t fit the demographic. When I contacted the organizers, they said indeed they would like to have me, and didn’t care what I wrote, they just wanted published writers to speak. I was scheduled for not one, not two…but SEVEN panels. Keep in mind, I had never spoken publicly on writing before, ever.

The convention ended up being a blast. However, on three of those panels, I sat alongside sci-fi/fantasy authors Jim C. Hines, Stephanie Osborne (who had the coolest NASA ribbons), and….*GULP* Brandon F*kin Sanderson. Needless to say, I was way out of my element and way nervous. I was terrified to sit with multi-award winning, bestselling Mr. Sanderson, who, let’s not be modest about it, 90% of the convention goers were there to see. What’s more, I was expected to sit with him and talk to a huge audience about writing, intelligently.

What did I learn from those three nerve-wracking panels? I learned that despite the fact Mr. Sanderson was at the top of the food chain and I was way down at the bottom, in the swamp, and that we write in radically different genres, our love of writing, the way we talk about it, and the techniques we use to evoke creativity are exactly the same. He was a tremendously nice and polite man. He moderated all three panels (basically directing the flow of conversation/controlling the subject matter/provoking the rest of us to speak) and he was extremely pleasant, encouraging, and helpful. I realized despite our different points on the spectrum we were both writers, and we both thought like writers. We could discuss it on the same level, all other things aside. It was incredibly comforting as a young, floundering author.

Jim C. Hines is also a darling of a man. I sat directly beside him for all three panels and he was just a great conversationalist and gentleman. He eased my nerves greatly before each panel.

It was an eye-opening weekend. I also made several fans at the time who were pleasantly surprised to find an author so radically out of place. I met author H.B. Pattskyn there, before she was published, and she was so wonderful and supportive of me on those days when this young author was so scared. I even had her sit with me on some of my other panels!

The thing I learned that weekend, and I still carry with me to this day, is that we’re all in this together, no matter where we are on the ladder, no matter what we write. Writing is a universal language!