My A to Z Challenge theme is teaching you how not to write a book, or a short story, or any piece of creative writing whatsoever. For more information, including links to previous chapters and lessons, please refer to this post. Now buckle in and proceed with…

THE WORST ROMANCE NOVEL EVER WRITTEN IN 26 DAYS. 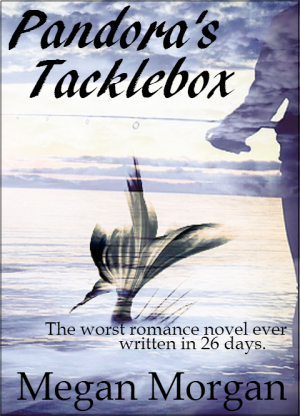 Billionaire Highlander cowboy Hawk MacHardcastle is tired of living the jetset life of champagne, bucking broncos, kilts, fast cars, and burning bundles of cash for warmth. Desperate to find meaning in his life, he retires to his family’s isolated cabin in the wilds of New Jersey, on the shores of majestic Lake Latrine.

There, Hawk plans on self-reflection and pursuing the great love of his life—fishing. However, Hawk’s self-imposed loneliness comes to an end when he makes a most unusual companion and fishing buddy.

Dropsy Velvet was once a young woman living on the shores of Lake Latrine with her settler family. However, a curse turned her into a mermaid and now she lives, sad and alone, in the depths of the lake. She hasn’t had human contact for close to fifty years, thanks to everyone either being terrified of her or thinking they’re drunk when they see her—but Hawk may be the connection to the world she’s been craving. Charmed by her innocent face, sparkling wit, and huge bare breasts, Hawk decides to help her find a way to lift the curse, as she will lift his: the curse of ennui and affluenza. But time is running out, for something sinister wants to flush Latrine away forever.

The next morning, Hawk made breakfast while Dropsy lay in the hot tub outside on the deck. He gazed out the window at her, smiling like a fool. Last night had been magical, breathtaking, everything he needed. He had already forgotten the rigors of running a business, about bucking broncos and Highland clan wars. For the first time in his life he was simply Hawk. And he liked the man, as much as everyone else did.

When he strolled out on the deck with a tray of the finest breakfast foods—toast, eggs, bacon, oatmeal, two pounds of Canadian bacon, more eggs, a pot of coffee, six cubes of sugar, a jug of milk, fruit, home fries, crepes, pancakes, waffles, a jar of syrup, and yet more eggs—he caught a wiff of something, something peculiar. The smell of fish boiling.

In horror, he dropped the entire tray of food and ran to the hot tub. He scooped Dropsy out of the churning water. She was flushed, her eyelids fluttering, her tail sizzling.

“Hawk,” she said weakly. “I fear I cannot live in your world. Take me back to the lake.”

WHAT THE HELL HAPPENED HERE?

A quandary is a necessary plot device—your characters find themselves faced with a challenge, or something that’s blocking what they want to achieve. In most stories you will have to make your characters struggle to get what they want. If everything is perfect and goes like it’s supposed to, it probably won’t be much of a story and you can write it all in one chapter. A quandary presents a problem that must be solved and the story is created in how your characters solve that problem. In romance, this often plays out in the form of the hero and heroine falling in love, but then something tears them apart or doesn’t allow them to be together. The suspense for the reader is in wondering how they will make it work, how their love will overcome.

Quandaries should be realistic though, not overwrought and dramatic to the point of becoming ridiculous. Throwing absurd roadblocks in the way of your character’s progress isn’t a good idea. Problems should arise organically—like they do in real life—or be born from the situation itself and the powers that are working against your characters. In other words, there’s lots of reasons a man and a mermaid might not be able to be together, you don’t also have to cook her in a hot tub. Fish soup, anyone?