Today I’m hosting R.L. King and her urban fantasy/paranormal thriller series The Alastair Stone Chronicles. Ms. King is giving away a $40 Amazon or B&N gift card, so make sure to comment, follow the tour, and enter the Rafflecopter giveaway!

Ms. King is here today to talk to us about world building in urban fantasy–as an urban fantasy author myself, it’s one of my favorite subjects!

I admit it—part of the reason I write urban fantasy (or at least the kind of urban fantasy I write) is because I’m a bit lazy when it comes to world building. I know there are plenty of folks out there who love the heck out of making up every society, fantasy race, map, exotic language, and alternate history that figures into their world, and that’s cool (seriously, I envy them, and wish I enjoyed it more than I do—I certainly like reading the results of it in others’ work!)

I am not, however, one of these writers.

For me, it’s all about character. I want to toss my characters into situations that will make them squirm, and watch both how they get out and how they interact with each other while they’re doing it. That’s the thing that really gets my motor running about writing novels. The world building is fun, to an extent—I’ve enjoyed tweaking my magic system, for example, and figuring out what kind of society mages in my world live in, but I’m perfectly happy having the Stanford University or city of Palo Alto or Winchester Mystery House in my world be pretty much the same as the ones in the real word…with the addition of some random evil spirits, monsters, and things that go bump in the night, of course!

I did do one bit of world building on purpose, though: I set my novels in a slightly alternative version of our world where almost everything is the same…except that technology hasn’t advanced as far. At the beginning of my series, cell phones are still the toys of the very rich, and personal computers are just starting to become a thing, while social attitudes (about subjects like women’s rights, gay rights, etc.) are essentially what they are in our real world. I did this because I felt it would be easier to tell supernatural thriller-type stories without the existence of Google, or the ability to just phone each other up and warn each other of danger. Jim Butcher already covered the “wizards can’t use technology” angle, and there’s only so many times you can believably cut off cell reception or have otherwise intelligent characters forget to charge their phones, so I picked a different way to get rid of the tech without casting my characters back into the days when things like homophobia and casual sexism were much more prevalent.

Was it the best way? Who knows? So far, very few readers have even mentioned it, let alone complained about it, and my editor assures me that it worked for him. I plan to slowly introduce mobile phones and the internet as the series goes on, so the characters can get used to it gradually.

You know, like we had to, at least those of us who are older than a certain age. 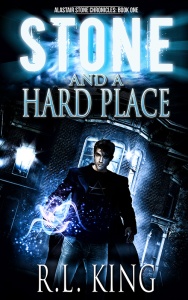 Dr. Alastair Stone, Occult Studies professor, powerful mage, and snarky British expat now based in Palo Alto, California, does his best to keep his academic and social lives separate from his increasingly frequent brushes with various malevolent forces from the supernatural side of the street. A little horror, a little humor, but mostly straight-up urban fantasy.

Stone and a Hard Place

Dr. Alastair Stone, Occult Studies professor and powerful mage, has his hands full trying to keep the two sides of his life separate as he trains a new apprentice, deals with a malevolent entity trapped in the basement of a wealthy old woman’s massive home, and battles dark mages intent on enslaving it for their own ends.

“…I’m going to kill you…” said a voice in the darkness.

Stone stirred, opened his eyes. He was still where he thought he was, Megan’s cheek warm against his bare chest, his arm draped protectively over her back. He listened for a moment, then shook his head. He must have imagined it. Or maybe it was the wind. He glanced at the clock on the nightstand: 1:42 a.m.

Megan muttered something and snuggled closer to him, and he settled back.

“…I’m going to kill you, and everyone you ever cared about. As soon as I am free, I will rip their entrails from their bodies…”

His eyes flew open again. He sat up a little, looking around, then shifted to magical sight. Nothing was out of the ordinary on either the mundane or the magical plane. “Who’s there?” he whispered, not wanting to wake Megan.

“…I will flay your skin from your body, and boil your eyeballs until they pop. You will beg for death…”

Stone looked around, trying to identify the source of the voice. At first he saw nothing, but then a faint light caught the corner of his eye. He turned.

There was a crack in the door to his walk-in closet. A thin line of unhealthy-looking greenish light shone from it, creeping out into the room.

And the line was getting thicker. 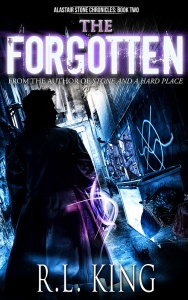 Dr. Alastair Stone is back, this time teaming up with Jason Thayer, a young man hunting for his missing sister. Embroiled in a web of odd homeless people, a growing conspiracy, and deadly danger, they soon realize that even if they find Jason’s sister, they might not be able to help her.

What do you do when you discover an extradimensional plot that threatens the safety of the entire world, but you can’t tell anyone about it because literally anyone on Earth could be part of it?

Jason let out a loud sigh, his natural tendency to want to move nearly overwhelming now. “How do we know if it doesn’t work? Do we have to stand in here forever?”

Stone was about to answer when he stiffened, startled. “It’s back,” he said, pointing at the mirror.

Jason spun around. Sure enough, the reddish figure had reappeared behind them in the mirror, looking as angry as ever. It said something to Stone in its bones-and-parchment voice, punctuated by many growls and other sounds of displeasure. The mage nodded. “She’s there now, then?” he asked.

The figure snarled and glared at Stone. It appeared to be contemplating another lunge out into the real world, but eyed the mage warily and decided against it. Instead, it spat at him. The spittle flew out, contacted its own side of the mirror, and ran down toward the table with a sizzle. Then it reached out with a ropy, muscular arm and attempted to sweep all the objects off the table on its side of the mirror. The candles, knife, and chalice went, careening silently over the edge and out of sight. The book remained, and the creature screamed in agony as its arm contacted it.

“It’s fighting me—” Stone said under his breath. “I’m going to release it now.” He reached up with both hands and put them on the mirror again. Loudly and clearly, he uttered a long sentence in the strange Latin-like language, then pulled his hands back abruptly and clapped them together in a sudden, sharp sound that made Jason jump. He stumbled, reeling back, realizing with horror even as he did so that he had no way of stopping himself. He was going to fall over backwards, taking out a good chunk of the circle when he landed.

As he went over, he got a last look at the creature’s face. Instead of looking angry, it looked suddenly surprised and triumphant. That lasted about two seconds. It flung itself forward again, clawed hands eagerly reaching in front of it, reaching for Stone, for Jason—

R.L. King is an award-winning author and game freelancer for Catalyst Game Labs, publisher of the popular roleplaying game Shadowrun. She has contributed fiction and game material to numerous sourcebooks, as well as one full-length adventure, “On the Run,” included as part of the 2012 Origins-Award-winning “Runners’ Toolkit.”

Her first novel in the Shadowrun universe, Borrowed Time, was published in May 2015.

When not doing her best to make life difficult for her characters, King is a software technical writer for a large Silicon Valley database company. In her spare time (hah!) she enjoys hanging out with her very understanding spouse and her small herd of cats, watching way too much Doctor Who, and attending conventions when she can. She is an Active member of the Horror Writers’ Association and the Science Fiction and Fantasy Writers of America, and a member of the International Association of Media Tie-in Writers.